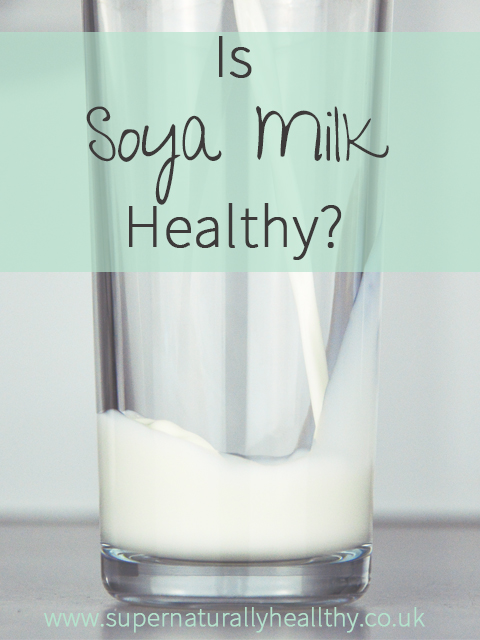 Over the last 2 weeks we have been looking at dairy. We have looked at the arguments for and against, and my own experience of consuming dairy and generally looked at if dairy is a healthy addition to your diet. To catch up , here is part 1 and part 2.

Soya milk, margarine and cream are supermarket regulars, as are now almond, oat, rice and lacto-free dairy milk. In fact there is such an array of dairy free milks that avoiding milk doesn’t need to be such a hardship – it can be a doddle.

Fo me, I have a genetic predispostiive that means I dont digest milk very well (runs in my whole family and started when we were babies). So I first went was dairy free at 16 and have pretty much been  off since then (I can be waaaay more lax about it now that I have healed my gut more so I will have occasional cheese and milk). And for many years soya milk was a staple of my diet. I drank it everyday and feel in love with its nutty taste and I repeatedly heard how amazing soya was for your body and health.

But is Soya Milk Healthy?   Surely it must be! We have all heard that the highest mortality rates are those who live in Asian countries where soy is consumed? Also, it comes from soy beans – that is pretty natural surely?

I used to love my steamed soya milks until I read more and more about the soya industry and the effect it has on our bodies.

Here is what I learnt:

As for our western assumption that Asian countries eat loads of soy products and still remain healthy and slim , this is a misconception. They do indeed eat small amounts of traditional fermented soya products but only as an accompaniment to other  foods. Miso, Temph and tamari are all more traditional soy products that are not eaten in large quantities and are traditionally produced – these are the only soya products I will eat.

So soya in itself is not looking great, but then take the further processing of soya into soya milk, margarine and other processed stuff and the picture looks bleaker still.

The ingredients in popular soya milk are the:

Maltodextrin is not a great addition to your diet. It comes from rice or corn and is heavily processed, has twice the glycemic index of sugar, extends food shelf and basically behaves like fake sugar causing insulin spikes and  fat storage. Yum.

So add that the nasty processed ingredients with the acid washed and genetically modified soya beans  – no wonder it wrecks havoc on your body!

Well its not going to kill you – its just food! 😉 #perspective

But  in my opinion (feel free to make your own!) I would say traditional, non GMO soya products like miso, tamari sauce and high quality organic tofu could be eaten occasionally, but if you suffer from hormone imbalance, infertility or other thyroid issues I would avoid all together (except for if you have very low estrogen). Avoiding it mean reading all processed food labels as it is sneakily in many things.

There is a whole host of other alternative out there which we will look at over the coming weeks but generally if you can’t drink milk then you need to reduce your milk usage and aim use only natural homemade alternative, but more on that next time.

So if you have the choice between a organic full-fat milk latte and a soya one – go with the cow! Or an americano if you are lactose intolerant!

And if you want more info like this, get freebies sent to your inbox and my free natural sweetener eGuide then join my tribe! Just link the link below 😉

Was that a surprise? Are a big soya milk drinker?

Thank you! We need to confirm your email address you eGuide will be winging its way to you soon 😉

I’ve just converted to soya milk due to a recent blood test flagging up a cows milk allergy!! A relative told me about this issue with soya milk ??? So I’ll have to consider the information stated here, and perhaps now trying almond milk .
Thing is I have a walnut allergy to, and unsure if I have allergies to other nut based products!

Your comments on Soya are quiet scarey, i just have to drink coconut or almond milk??your information was very informative thank u??

You’re so welcome – thanks for stopping by!

My partner’s family are all incredibly intolerant to ANY form of Soy, resulting in bloating, painful guts, sudden dashes to the loo and a need for sleep within an hour of consuming.
It is interesting how much it is found in foods now and anyone wanting to know what to look out for check any:
Bread esp in when eating out in restaurants.
“Flavour enhancer”
“Vegetable oil”
Vegetable protein
Lecithin (unspecified)
And others.

Food labelling in UK should mean that is now as a minimum in BOLD on ingredients listing or (*contains Soy or Soy Products) labelled. It is also a recognised allergen so should be on a food establishment’s Allergy Menu which certainly English & Welsh establishments have to have.

Partners family is soooo reactive to it, we don’t go ANYWHERE to eat unless they can provide an allergy menu or speak directly to the cook if everything is home produced.

[…] you be eating it and is it part of a healthy diet? Then looking at the dairy alternatives and asking the same questions. Now to end this mini series I will be looking at one full fat […]

Are Dairy Alternatives Healthy?#4 Coconut Milk and How to Make It | Super Naturally Healthy with Kezia Hall
5th November, 2013 at 5:24 pm / Reply

PREVIOUS: Beautiful Things #3 »
NEXT: Detoxing: Fad? Or Actually Good For You? »